Costumes from the Japanese Anime Television Series are now available at economical prices. The costumes inspired by the AKB48 band became popular soon after their release and are now available for all characters and personalities. The costumes are mainly designed in black and red and uniform cloth and cotton has been mostly used for them. The designers have made the costumes to look exactly like the original. The costumes contain an average of 7 to 8 sets consisting of dresses, jackets, stockings and gloves etc. The costumes also have small accessories with them to complete the entire attire. 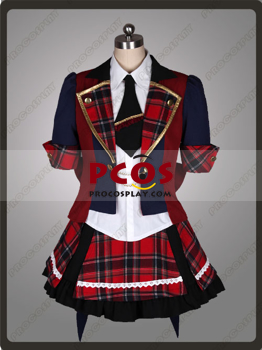 Beautifully designed Tomomi Itano Cosplay costumes are available with us. Professionally designed such Cosplay costumes are designed on the costumes of your favorite cartoon character which you idealized in your life and want to wear clothes like them. Tomomi Itano is an important team member of the idol group AKB48 comprising the Japanese girls. She is very popular among the girls as she looks stunning in her red and blue costume. Now girls can become like Tomomi Itano by wearing exclusively designed Tomomi Itano Cosplay costume that is available in various sizes. The costume is made by using cotton material and has 8 sets which include apron, bows, gloves, tie, skirt, jacket, hair pins and shirt.
$89.00
Refine
×
Category
Product Tags
Categories
Popular tags
View all
Copyright © 2023 procosplay. All rights reserved.